On or off topic discussions. Whatever is on you mind...
Post Reply
3 posts • Page 1 of 1

There was an interesting post on the Brigantine Castle Facebook page that I thought I’d mention. The Brigantine castle (btw) was a haunted house walk-through attraction that was built on the Jersey shore in 1976. It had a pretty major influence on my young life (and in later years) influenced my writing style; the decision to use glass panels in the walls (as opposed to standing display cases) in my Girls Under Glass series was a direct nod to the castle. Anyway, the discussion was about what was your favorite /scariest part in the castle. A former female cast member chimed in (and I quote): “The Portrait. Sitting there so still and letting them wonder if you’re real or not ... then scaring the crap out of them!”

Now the portrait room was where a host would get a bunch of guests cramped in close in this little room, and there were various framed portraits, including a life-sized one mounted on a wall above the fireplace. The host would tell you a story about each one to keep you occupied, and then BAM! The actor would suddenly jump out of the picture frame and scare everyone to death. I couldn’t help but think of the tie-in with mannequin modeling and having to focus on being perfectly still in front of a room full of onlookers. They might have to do this more than a dozen times a night, 7 days a week. I’d imagine some of them got really good at being still.

…And the part that scared me the most? The glass panel in the floor in the swamp room. It was supposed to be a coffin with vines growing across the top, and as you were about to walk over it in the dark, motion triggered the light inside. There was a girl laying inside with flowers; she suddenly came to life, pounding and clawing at the glass, screaming “Let me out! Let me out! I’m still alive, but I can’t breathe! PLEASE HELP ME!” I was so terrified as a six year old, that I side-stepped the panel and bolted. When I made it safely outside I asked my dad, “Are you sure she’s ok?” “Yes, yes; it’s all an act.” I was afraid of the dark for a time after that. Totally disappointed me when I went through the following summer w/ our teenaged babysitter and they took that part out. Safety considerations aside, I was told that the actors found it too claustrophobic, hot and very hard to breath inside.

The castle suffered major storm damage in 1982, and closed for good in 1984. It burned to the sand in 1987 under mysterious circumstances (as did the two other haunted house attractions in NJ). 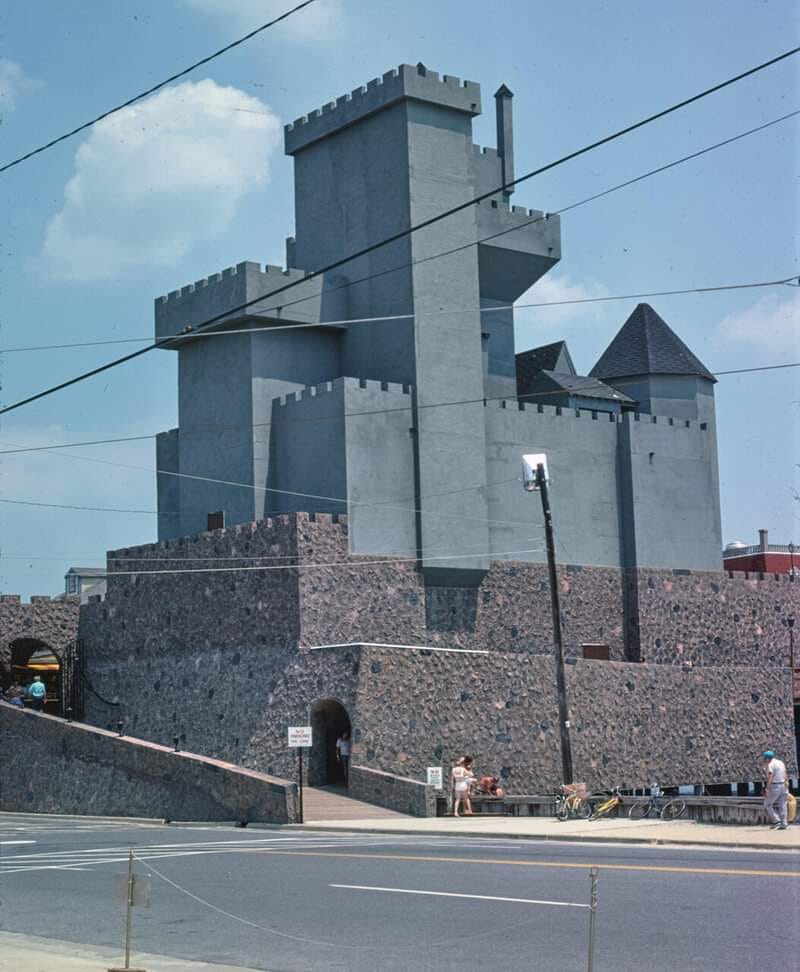 Re: The Brigantine Castle

Nice write up on that. Wish it was still around, I'm on the east coast if it was still about I would have defo consider road tripping up there to check it out once things calm down a bit more. Did they have any wax works on display?
World Of Susie Yoshida
Top

Re: The Brigantine Castle

On the Brigantine Castle: Yes, there was a mixture of figures as well as live actors / actresses throughout the castle portion. I’m not sure if they were fiberglass or wax, (possibly a mixture of both), but they were definitely realistic and the whole place had a creepy House of Wax feel. I recall one dark corner where you’d walk into a left turn, the light would activate and there’d be a blood curdling scream. Inside the glass panel at right was an attractive woman w/ damp hair wrapped in a skimpy towel (either inside the shower, or just getting out) - covered in rats! The Pirate Motel (where my family stayed every summer since 1974) was converted into luxury condos after 1980. Brigantine had slowly transformed from a family vacation spot into a place to stay while gambling in nearby Atlantic City. My parents made the switch to Wildwood Crest in 1981...

Dracula’s Castle in Wildwood NJ: I saw a commercial for ‘Dracula’s Castle’ on the Wildwood pier and insisted we go. Not as well produced as the Brigantine Castle, but it was still pretty cool and there were two levels: the walk through castle up top, and the ‘Dungeon Boat Ride’ around the bottom level. Again there was a mixture of static figures & live actors (including a similar portrait room). One thing that stuck out with Drac’s castle was the laboratory room. I remember there were two female mannequins dressed in their bra’s & Panties and standing at attention in glass display cases. The actor portraying the “mad scientist” was a teenager. His story went; “You see that pretty girl over there on the right? Well that’s my sister! She ratted me out to my mom for going to a party, so I decided to teach her a lesson. Now she’s cryo-frozen in one of my freeze chambers. Of course my mom threatened to ground me after that, so I had to freeze her too! Now they’re both on display in their underwear for everyone to see!” As you could imagine, my perverse asfr-fueled teenaged mind was running wild after that one. Unfortunately, they changed the lab room the next year, and only one "freeze chamber" was still there, (no mannequin). I went on vacation w/ my family for the last time in 1988, and returned to Wildwood a decade later for a “lost bachelor weekend” with some buddies, and went through both tiers for the last time. The Summer Sands (where we always stayed) was converted into condos soon after.

On a side note: I went to Wildwood Crest for spring break after my first year of college - spring 1989. I think there was 9 of us in two cars. We got lost in Atlantic City at 3am, and I got the bright idea “Hey, let’s go up to Brigantine and find the castle!” We literally circled the island twice looking for it, before someone said, “A giant haunted castle right on the beach, huh? Suuure…” "I swear it was right on the beach at the very end - you couldn't miss it!" It wasn’t until 2003 that I got on the internet and found out the Brigantine Castle burned down in 1987 under mysterious circumstances. Some kids broke into Dracula's castle in January 2002, and accidentally set it on fire. The owner’s put up a water flume in its place.

Dracula's Castle in Wildwood. The 2nd picture is from inside part of the lab with one of the (now empty) "freeze chamber" props standing in the background. It may not look like much, but they kept the lights down low (sometimes flashing for added affect). You were mostly on the go in those things. 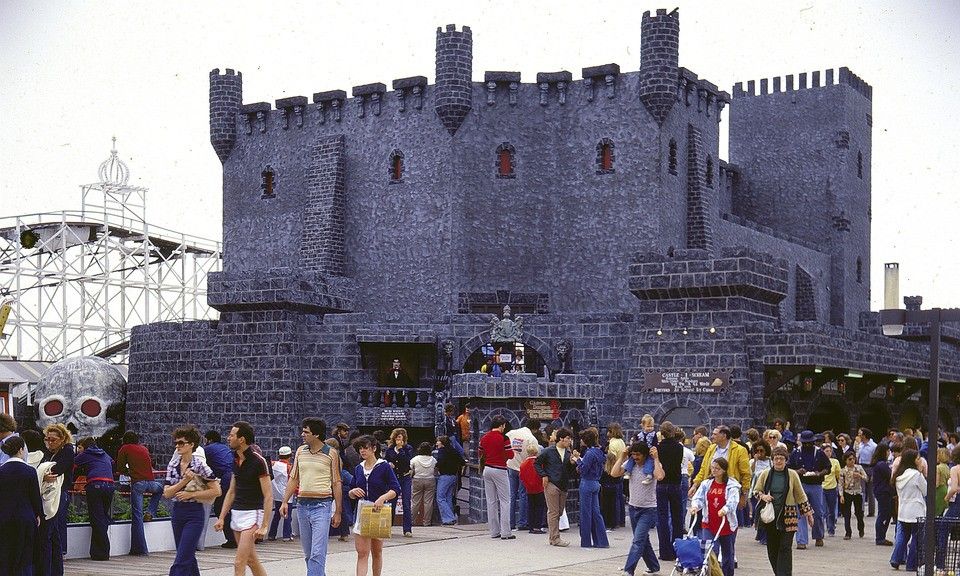 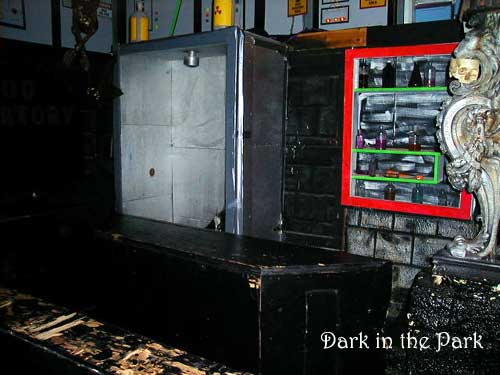 "Your beauty will be preserved forever, my dear!"
Top
Post Reply
3 posts • Page 1 of 1